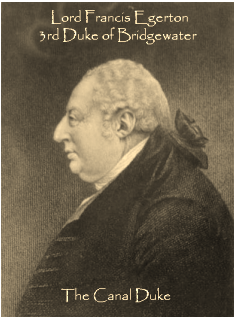 The Manor of Worsley was passed to the Egerton family in 1598 when Dorothy Egerton died. She was the only legitimate daughter of Sir Richard Egerton of Ridley, Cheshire. Dorothy Egerton married Richard Breteton of Tatton and Worsley.

Prior to that Worsley had been added to the possessions of Sir John Massey of Tatton in Cheshire when the line of male heirs from Elias de Workeslegh or Workedlegh expired.

The 3rd Duke of Bridgewater known as the Canal Duke, was born on 21st April 1736. He inherited his title at the age of 11 years. He was known as Lord Francis Egerton until 1748. He was a British nobleman, the younger son of the First Duke.

Shortly after the Industrial Revolution which began at Ironbridge, the 3rd Duke of Bridgewater quickly exploited the rich open local coal seams on his estate in Worsley. There was great demand for increased and better transport to service his coal mines at Worsley and convey coal to expanding markets. The Duke and his agent John Gilbert planned to build a canal from Worsley to Manchester and Salford. The Duke's father had made plans for the canal system, but did not fulfill them.

James Brindley was engaged as the engineer for the project.

The first Bridgewater Canal act was ratified in 1759 and the Aqueduct opened in 1761. Following that the canal reached Cornbrook in Manchester in 1763 then building went on to reach Castlefield in 1765. The route to Runcorn was finally completed in 1776 linking Manchester with the Mersey Estuary.

The Bridgewater canal is often said to be the first true canal in Britain and the modern world. Beneath a large part of Worsley even today, there is a system of some 50 miles of underground canal networks, which run for many miles on two levels. This was used to move coal from the Duke's mines onto the boats to be taken to places such as Manchester.

After the 3rd Duke had a broken engagement to Elizabeth Gunning, he devoted himself to his vast estates, especially Worsley.  Consequently, the 3rd Duke died unmarried on 8th March 1803. He is buried at Little Gaddesden near Ashbridge in Hertfordshire. The Dukedom died with him, although the Earldom was inherited by his cousin Lieutenant General John Egerton who became the 7th Earl of Bridgewater.

In his will the 3rd Duke left the income from the canal to his nephew George Leveson-Gower the Marquess of Stafford (later to become the 1st Duke of Sutherland). On the death of George Leveson-Gower it was to go to Stafford's second son Francis, provided he changed his name to Egerton; and then to his heirs and successors. In order that the trust should last as long as possible, an extraordinary use was made of the legal rule that property may be settled for the duration of lives in being and twenty-one years after.

On his death the 3rd Duke left the administration of the Manor of Worsley, the canal and coal mines to the trustee of three men on behalf of his nephew. The three men were:-

Edward Venables-Vernon-Harcourt -  who was Bishop of Carlisle at the time  and later became Archbishop of York.

Robert Haldane Bradshaw -  Robert was the Duke's agent and Superintendent. He managed the estate, for a salary of £2,000 a year, and the use of the Duke's mansions at Worsley and Runcorn. Both Sir Archibald MacDonald and Edward Venables-Vernon-Harcourt, married nieces of the Duke and were therefore silent trustees.

The Bridgewater Trust expired in 1903 (100 years after the death of the 3rd Duke) leaving the estates and mines in the sole ownership of the 3rd Earl of Ellesmere. 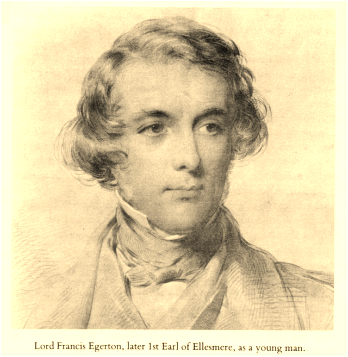 Francis Leveson Egerton succeeded his father as beneficiary of the Trust in 1833. He became the first Earl of Ellesmere in 1846 and died in 1857. He was succeeded by his son George Granville Francis, who died in 1862. Francis Charles Granville the 3rd Earl of Ellesmere was his son, who became the sole owner of the Worsley Estates and Mines in 1903.

In 1923 John Francis Granville Scroop the 4th Earl of Ellesmere in order to defray death duties on the Lancashire properties and estates accepted an offer from a syndicate of Lancashire businessmen which included Jesse Wallwork and Joseph Ramsden.

The consortium registed Bridgewater Estates as a public Limited Company on 10th Feburary 1923 and it was agreed that Jesse Wallwork was to be the Managing Director of the company.

In 1983 Bridgewater Estates had a land portfolio of approximately 12,000 acres around the Salford and Manchester area.

Peel Holdings Group acquired Bridgewater Estates in 1983 and it was added to their portfolio which included Peel Mills and John Bright & Brothers.

In 1987 The Manchester Ship Canal was added to Peel's portfolio.

Jesse Wallwork Family Tree
www.thewallworks.co.uk
2005
contact email wallwork.history
Research and written content © Wallwork History​
PLEASE NOTE:- If you wish to share any images/research from my website either contact me or post an acknowledgement link to my website. I am all in favour of preserving and sharing our local history.  It is therefore not my intention to infringe anyone else's copyrights.