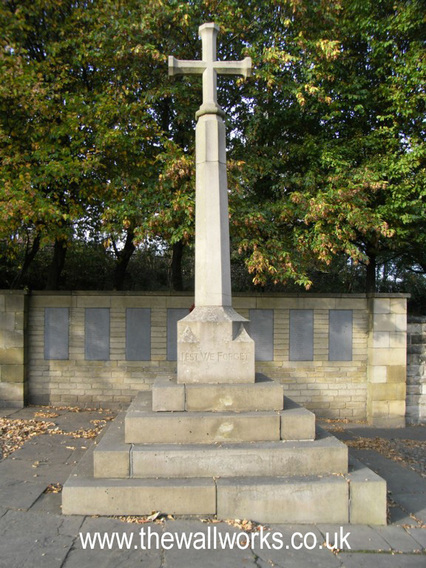 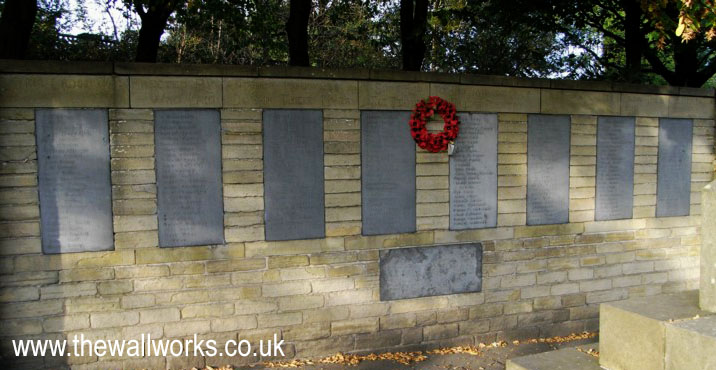 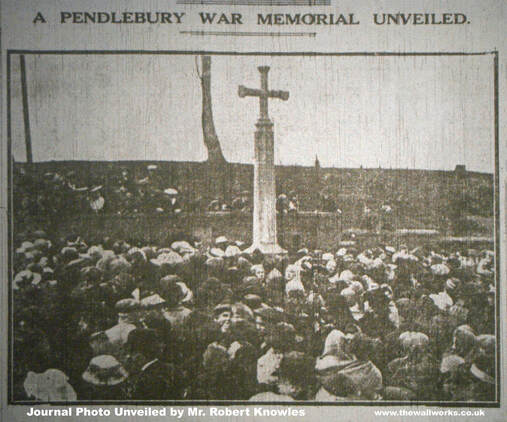 Photo credit to The Journal
On the day of unveiling the Journal reported as follows:-
The memorial erected by Andrew Knowles and Sons Limited.
In memory of the men employed at their collieries who fell in the war was unveiled and dedicated on Tuesday afternoon.
The ceremony was simple, but impressive, and was witnessed by a crowd of between 2,000 and 3,000 people. Perhaps no more suitable spot in Pendlebury could have been selected for a memorial of this special character. From the top of Smithy Brow, where out of its junction with Bolton Road a spacious semi circular recess has been formed for the erection, is a view of the Lancashire collieries seen.
In the immediate foreground are the shafts and winding gear of the Agecroft and Clifton Hall Collieries and beyond, looking across the Irwell Valley are many grim symbols of Lancashire Industrialism.
It is a spot also which will be passed and repassed hundreds of times in the days to come by thousands of miners as they go to and from their hazardous calling, just as many of the men whose memories are enshrined in the memorial must have passed before they were called from the mine to fight for their country.
Within the recess, on a stone paved platform, has been erected a handsome cross from a design by Sir Charles Nicholson. It is of Derbyshire stone and stands 18ft high, rising from a plinth of four steps.
The only inscription on the cross itself is in the words on the plinth.
"Lest We Forget"
But a few feet behind and built into the wall, is an entablature of stone inscription: "This cross was erected by Andrew Knowles and Sons, Limited to, the memory of the brave men from their collieries who laid down their lives in the service of their country.
A.D. 1914-1918
Below this are eight slate tablets upon which are inscribed the names of about 200 men. Among the crowd were many of the fellow workers of these men, some of whom, no doubt had been their comrades in the battlefield as well as in the mine. It was evident too, that many especially among the sombre-garled women, were near relatives, for there were evidence of emotions which would not be restrained.
​
Among the directors of the firm present were the chairman (Mr. Robert Knowles) to whom the ceremony of the unveiling was assigned. Mr Arthur Knowles, Mr H. S. Marshall, Mr F.F. Mailv, and Brig-General Le Marchant: Mr J. T. Browne (general manager) Mr. T. Greenhall, J.P. (President, Lancashire and Cheshire Miners’ Association) and Mr J. H. Sutton (Local Miners’ Agent). There was also present a bugle party from the Lancashire Fusiliers.

Mr. Robert Knowles said on the day:-
The monument is dedicated to the memory of the men employed by the firm, who fell, and they called upon one and all to help to protect it, so that it might remain something nice to look upon in glorious remembrance of brave men. ​
Long may the memorial remain where it is.
It is also an historical reminder to our local coal industry where the men all worked so hard.
www.thewallworks.co.uk
2005
contact email wallwork.history