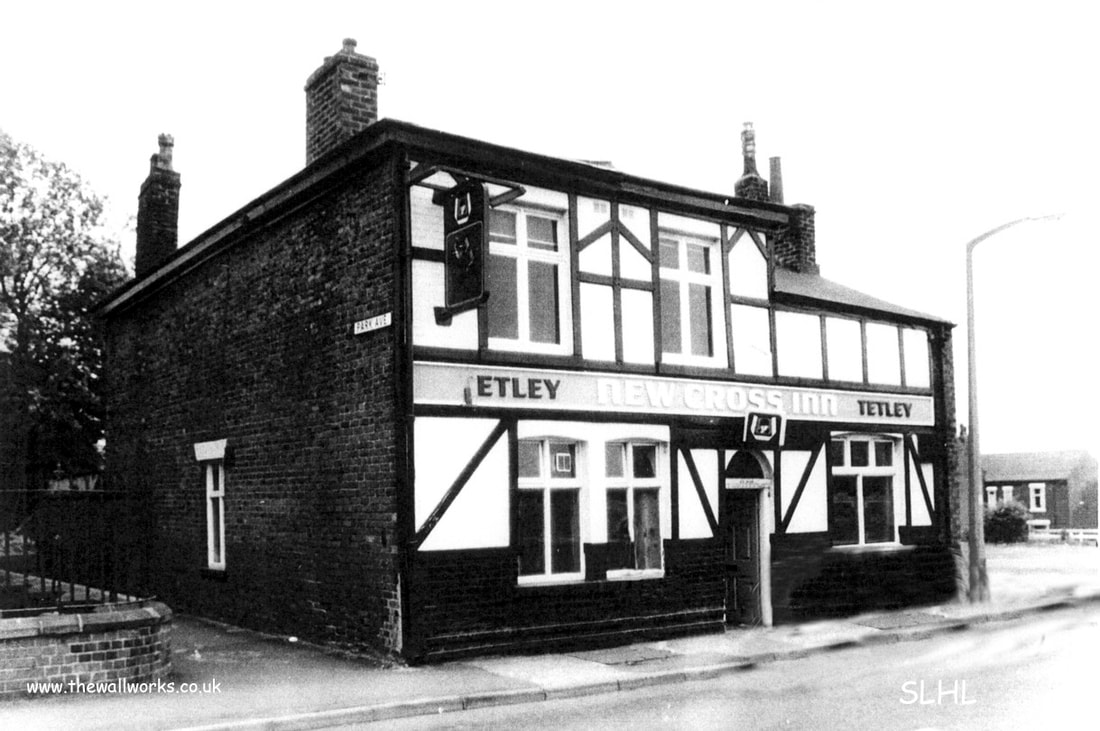 photo from SLHL edited by Wallwork History
I feel I should also mention Halligans a great little pub in Swinton Hall Road.

Many an hour would be spent singing away whilst some one played the piano in this cosy little pub.
The pub was nicknamed Halligans after Robert Halligan the landlord in 1933.
My parents looked after Halligans when Robert was on holiday.

My great Grandparents Henry (seen below) and Emily Wallwork and their family including my Grandfather Joseph Wallwork lived in the adjoining cottage seen on the photograph which later became part of the pub.

My Mum and Dad and many of their closest friends and family loved and enjoyed Halligans. It also had a family connection for my Dad given that his father and grandparents once lived there.
It was a great little social circle which must have kept them all going during and following WW2
Like many of the locals Dad had his own pewter mug on a hook behind the bar.

I remember well the smell of beer as we walked past the door and especially when someone opened it, coupled with the sound of chatter and smoke bellowing out.
Like many families in the area, we used to go swimming at the baths next door. 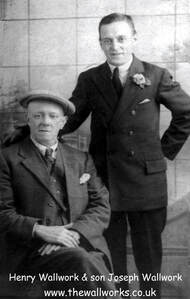 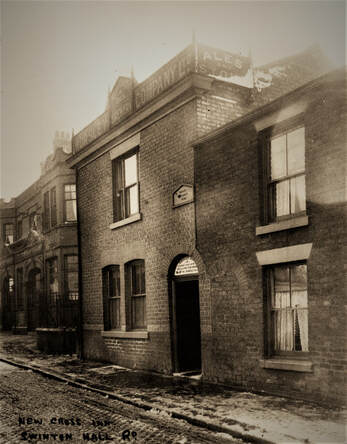 New Cross Inn, Bridget Kay named over the door. Photo credit S.L.H.L.
This Photo was taken between 1915 - 1928 during the time Bridget Kay was the licensee.

​It seems to have been taken during the winter months as remnants of snow can be seen scattered around.

Swinton baths can also been seen standing proud next to it separated by Park Avenue.

The bricked up doorway you can see next to the entrance of the pub was the original front door to my grandad Joseph Wallwork's family home.
​
​Photograph held at Salford Local History Library.
New Cross Inn Swinton Hall Road, Swinton.
​New Cross Inn, (Halligans as we knew it) was originally one of 15 cottages known as Mount Pleasant. It stood on Swinton Hall Road, next to Swinton Baths.

It was built around 1849 by the owner Thomas Clough.
The date can be seen on the name plaque above the door.

Thomas Crompton was the first recorded licensee of the pub in 1856 until 1887 and during that time the pub was know locally as Crompton's Beer House.

Thomas Crompton also owned other pubs in Swinton and Pendlebury in a joint venture with Thomas Rothwell and W.H. Lomax.

The New Cross Inn was privately owned until it was assigned to Worsley Brewery Company in 1896.
​
From 1888 - 1932 members of the Kay family were the licensees.

Robert Halligan was the licensee from 1933.

The New Cross Inn was a small beer house with a vault and bar, it was extended into the cottage next door and was used regularly by workers of the nearby Acme Mill and the  Pendlebury and Swinton Spinners Association, along with workers from other nearby firms and of course the locals.

In the late 1970's the pub was made open plan, which opened up the snug and the concert room where the piano was housed. Hand pumped beer was still being served during the 1980's.

Halligans was a well known and well loved little pub, which I am sure will hold special memories for anyone who visited it.

Many a good sing song was sung along to the sound of the piano being played.

Local family parties were enjoyed and lifelong close nit friendships were made in Halligans!

Sadly, it was demolished a number of years ago.

Now a block of flats stand on its land, but the memories live on.
www.thewallworks.co.uk
2005
Contact  Wallwork History
Research and written content ©Wallwork History.​
PLEASE NOTE:- If you wish to share any images/research from my website either contact me or post an acknowledgement link to my website. I am all in favour of preserving and sharing our local history.  It is therefore not my intention to infringe anyone else's copyrights.