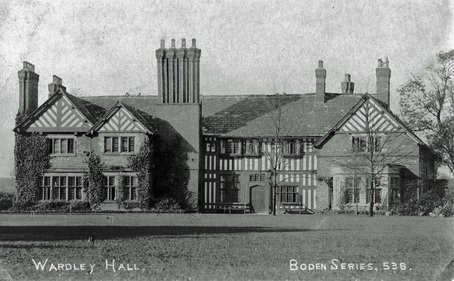 ​Wardley Hall was built by Thurstan Tyldesley in the reign of Edward V1 (1547 – 1553) on the site of a former hall which dates back to the year 1300.
The hall was later used as a farm and left in the hands of Matthew Moreton. Following the requisition of horses, carts and the ransacking of the hall in 1745 by Prince’s Charles Edward Stuarts army who camped in “Rebels Field” Wardley, whilst on their way south. Matthew Moreton decided to set his servants and farmhands up in hand-loom weaving, as a means to earn money to buy more horses and carts so that farming could commence.
On clearing a room to set up for hand-loom weaving a maid found the skull in a chest and thought it was that of animal, so she threw it out into the moat (which at the time surrounded the hall).
A violent thunder storm followed and it was believed that the skull had made it happen. Matthew Moreton had the skull retrieved from the moat and put back into the hall where it remained.
After that incident it was thought terrible repercussions would occur if the skull was ever to be removed from the hall again. 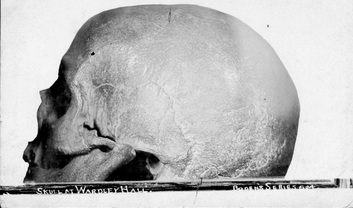 There was for quite some time confusion as to who the skull belonged.
Captain Hart Davies came to live at Wardley Hall as an agent for third Earl of Ellesmere in 1900 and along with the help of the Earl’s archivist Stratham Holme set about researching the history of Wardley Hall and the rightful owner of the skull.  Following a palaeontologist’s reconstruction of the owner of the skull, it was confirmed to be Father Ambrose Barlow a Roman Catholic priest.
Further test have since been carried out to conclude that the skull is indeed that of Father Ambrose Barlow.
Edward Barlow was born in Manchester in 1585 the son of Sir Alexander Barlow. Edward took the name Ambrose when he became a Benedictine monk. He was ordained in Spain where he studied the Roman Catholic priesthood then later returned to Manchester.
The third Earl of Ellesmere had a recess made in the staircase where the skull was boxed in and he kept the key.
The skull for a long time was thought to be that of Roger Downes a Cavalier of Charles the second’s court whose family lived at Wardley Hall. Roger Downes was a murderer and criminal who met with a violent death after a brawl with one of the London watch. The body of Roger Downes was brought back to Wardley in a wooden box where it was found that his head was intact all for the top of his skull, thus ruling out that the skull kept at Wardley Hall clearly did not belong to him.
Father Ambrose Barlow had given a secret mass in the chapel at Wardley Hall on Easter day of 1641 following this mass he proceeded to Morley’s Hall in Astley, where he was captured and committed to prison in Lancaster Castle. He was convicted of treason for preaching Catholicism, he refused to give up his religion and was hanged, drawn and quartered on September 10th 1641
The head of the Martyred priest was displayed on a spike at the gate of Lancaster Castle and on the gate of the Collegiate Church (now Manchester Cathedral), where Francis Downes of Wardley Hall was thought to have retrieved the skull and kept it hidden at his home Wardley Hall. Francis Downes was a kinsman of Father Ambrose Barlow. 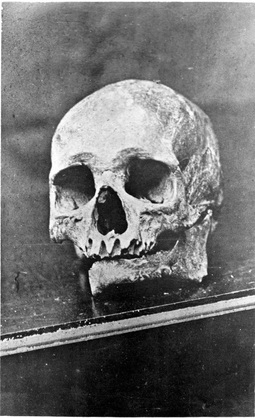 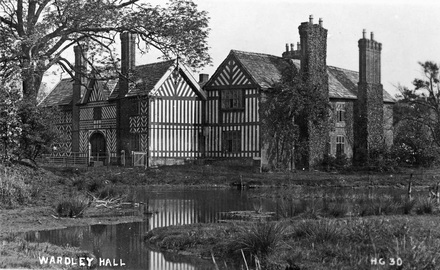 ​I remember a group of us being taken to Wardley Hall from school St. Ambrose Barlow to see the skull. It is something I will always remember.
www.thewallworks.co.uk
2005
contact email wallwork.history
Research and written content ©Wallwork History.
PLEASE NOTE:- If you wish to share any images/research from my website either contact me or post an acknowledgement link to my website. I am all in favour of preserving and sharing our local history.  It is therefore not my intention to infringe anyone else's copyrights.
Acknowledgement to Salford Local History Library for the use of photographs held in their archives on this website.
Acknowledgement and credit to the photographer or collector is given with images sent to me to use on this website where possible.