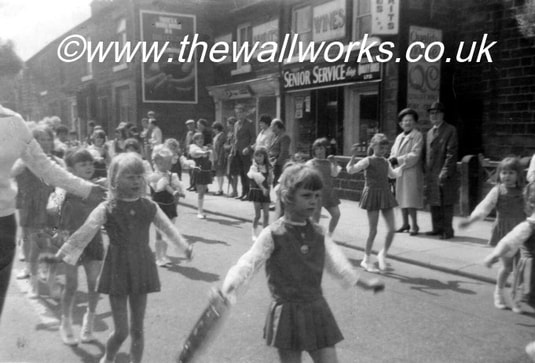 © thewallworks.co.uk
The troupe was run by  Mrs Oakley who was from Farnworth.  The Senior troupe practiced in Farnworth.

We were in the Junior troupe, we used to practice in the Scout Hall adjacent to St. Augustine's church in Pendlebury.

There was Mrs Megson who lived near the top of Hospital Road, Pendlebury and her daughters, who also ran the troupe.

Later Ruth Wallwork began to help with the running of the troupe.

Well here goes, this is what we did:-

We used to practice twice a week in the Scout Hall, this would be after us leggin it through St. Augustine's grave yard to get access through the side door.

We would dance until our hearts content, and until we had perfected the rhythm and routine. There would be a Leader of the troop and a Mascot.

The Leader would have a tambourine trimmed with ribbons and she would be responsible for keeping the troupe in line. The Mascot would be at her side with her shakers, wearing a sash edged with fringe with Mascot embroidered on it. The rest of the troop had shakers in each hand.

Our uniforms were red dresses with a pleated skirt and white lace sleeves. We had to have knee length white socks and immaculate white pumps with two bells fastened onto the laces.

During the summer months we would attend carnivals which took place in different towns. We would then parade through the streets dancing with a big brass band or two in tow, every time the big drum was hit your heart used to feel like it was about to jump out of your chest!

Then we would all end up on some field, where we would perform in turn our Morris Dancing routines.

We would start off in a straight line marching with hands on our hips to music, then split off into various dance routines. The dance was fast with neatly choreographed moves. Every one had to be in step with the music and the rest of the troupe. Points would be lost for any mistakes made.

Of course there were prizes for the best performers, trophies and medals to be won.

You would wear all your medals pinned to your dress or sash.

There would usually be a fairground with the carnival, which we were allowed to go on after the dancing.

During the Winter months we would attend functions, where each troupe would pick a Queen, Princess and Junior Rose Bud. At the functions you had to walk down the hall, then do a curtsey to the Queen of the town you were visiting, who would be sat centre stage with the Princess and Rose Bud sat on either side of her.

It was a grand affair, with a dress code of long dresses, with trains and sparkling diamantes, tiaras, crowns and flowers.

You would bring the Queen whose doo it was, a present and you would also receive a gift from her and her troupe.

After the ceremony there would of course be a disco and dancing. 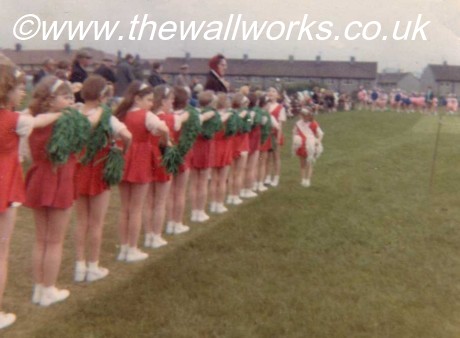