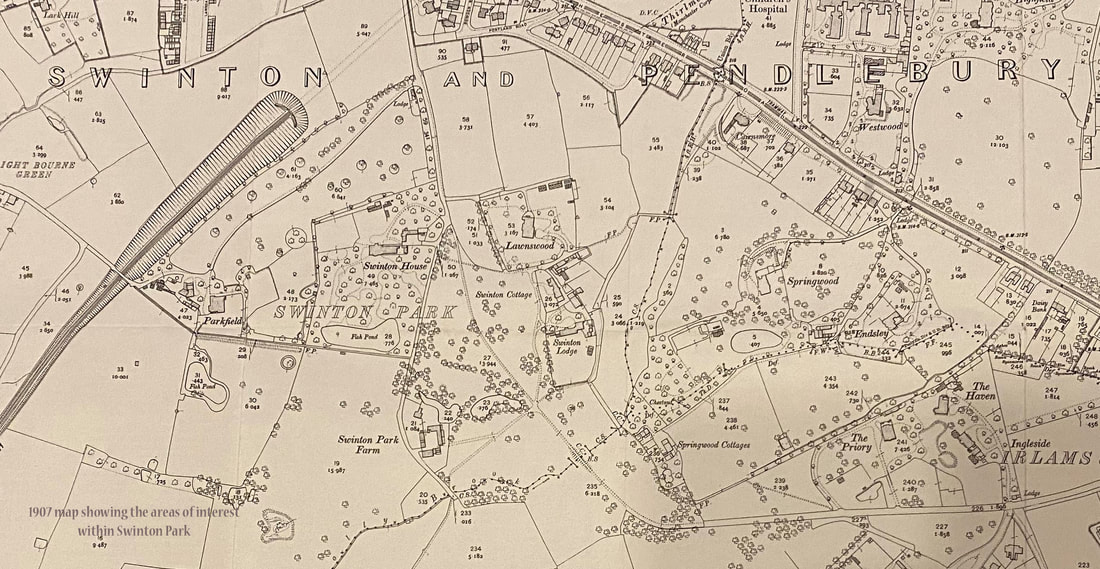 Britain from Above image ​EPW038567 please see their website for use of this image. ​
​Swinton House

Swinton House was built in the 17th century. It can be seen on the map above, and on the aerial photograph from Britain from Above.
It stood just off Barton Road.

Just to give an idea of how life was in 1675 living at Swinton House.

James Watson can be seen as the land owner in 1764 of the Swinton Park Estate. which was formally owned by the Eckersall’s family.
Swinton House was later owned by the White family.
Occupants of Swinton House

In 1851 Swinton House was occupied by the Atherton family.
James Atherton was a spirit merchant who was born in Halifax about 1796.
One of his daughter's Eleanor Atherton was born 1843 she remained at Swinton House her family home until her death in 1901.
Mary Swarbrick was Eleanor's lady's maid who had lived with family since 1851 she also remained at Swinton Hall until 1901.
Swinton House lay empty until 1904 when it was leased by the Manchester Education Committee who used it as a school for disabled and poorly children.
21st May 1909 a newspaper article reported Manchester Education Committee leasing Parkfield House in addition to Swinton House which was full. Parkfield House needed no work doing on it in order to accommodate another 60 additional disabled children.
The Manchester Education Committee bought Swinton House and Parkfield House in 1906.
On looking at the 1911 census you can get a sense of how big Swinton House must have been, as there were over 100 patients listed, along with 26 member of nursing staff and house staff. Although these may have been the occupants of both Swinton House and Parkfield which had merged by then.
Swinton House was a three storey building, the left wing was the nurses quarters. The right wing and centre of the house was divided into wards for children who required treatment over a number of years.
Swinton House and Parkfield House was a temporary home to disabled and sick children aged from 2 years to 16 years. The children were admitted prior to having operations at Manchester Royal Infirmary and then sent back to the houses to recover. According to a nurse who did her training there in the 1920's a surgeon used to come to the houses from Manchester Royal Infirmary to visit the children on a weekly basis. A teacher was also on hand and the children had to follow a full school curriculum.

Parkfield House stood roughly where the Parkfield/Linksway estate now stands, which was built around 1937.
There is still a stone buttressed wall remaining which can be seen on the East Lancashire Road covered with ivy and other vegetation. The wall fronts Linksway and part of Wingfield Drive. This wall formed part of the boundary wall of Parkfield House.
Occupants of Parkfield House

Parkfield House was once the family home of the music composer Gerald Graham Peel 1887-1937
Gerald Graham Peel wrote over 100 songs - some of which were performed as far afield as Australia by the famous trio bush poets William Ogilvie, Banjo Patterson and Henry Lawson.
Gerald Peel 1847-1910 (father of Gerald Graham Peel) was an Egyptian Cotton Merchant and Spinner, BA of Oxford, and Magistrate of Pendlebury. He was born in Swinton and baptised at St. Peter's. Gerald Peel was the son of John Peel also a Merchant and his wife Esther.
Gerald Peel lived at Parkfield House with his wife Elizabeth nee Graham and family during 1891.
Parkfield House was also home to other wealthy business men such as Clifford Smith and his family in 1881. Clifford Smith was a Mining Engineer, Magistrate and Estate Agent.
There was also a gardeners' cottage in the grounds known as Parkfield Lodge. This was occupied for a number of years by Mr. William Royle the head gardener and his family.
The Parkfield Coachman's Cottage was occupied for 20 years or more by the coachman Mr. Henry Williams and his family. Henry was originally from Anglesey.
Present day

Springfield Primary School now stands on the land once graced by Swinton House.
Swinton House and Parkfield House were both demolished prior to 1938.
A new school was built and opened in 1938 named Swinton and Pendlebury Open Air School which stood in approximately seven acres of parkland. It was a special community Open Air School.  Each classroom had windows to three sides, so that lessons could be conducted in the open air. The school was later renamed Parkfield, it was also well know locally for it's extra large globe in the garden.
The Open Air school closed in 1991 and was demolished due to problems with asbestos. ​
2021 Update:- Due to clearance of the overgrown vegetation it is nice to be able to see the stone buttressed wall which once formed part of the boundary of the original Parkfield House. The wall can be seen from the East Lancashire Road, fronting Linksway and part of Wingfield Drive. ​ 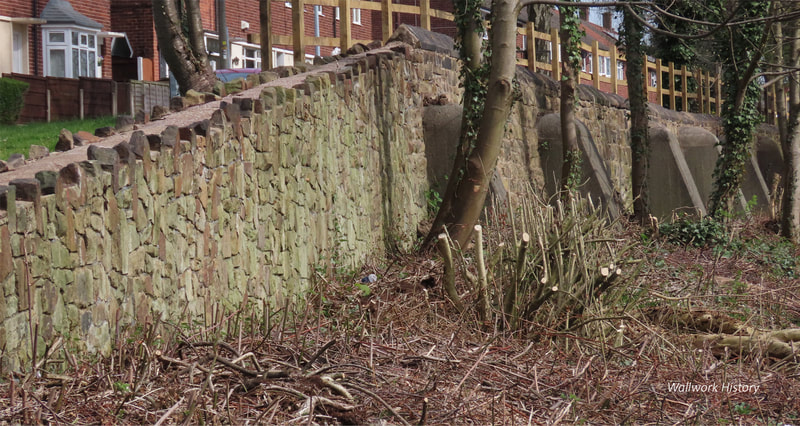 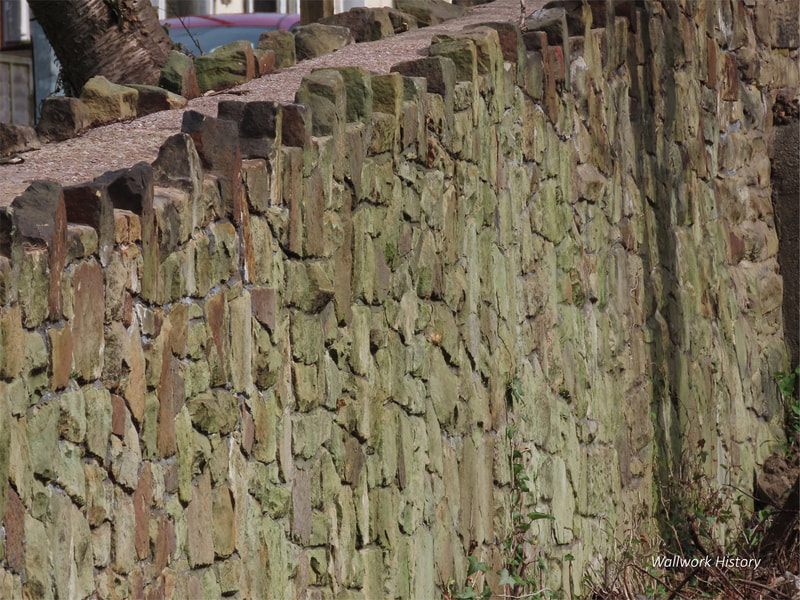 ​Lightbourne Green
​
​Documents recorded in 1764 show Robert Lansdale lived at Lightbourne Green which was previously owned by Thomas Valentine, and Richard Lightbourne before him. Hence the name of Lightbourne Green.
Lightbourne Green was a farm with other out buildings, it too can be seen on the maps.
Occupants of Lightbourne Green Farm
​
John Moores farmed at Lightbourne Green from at least 1841 until his death in 1874. His wife Mary and family carried on living and farming there after his death. They still lived there in 1881 when Mary was listed as a farmer of 74 acres employing 2 labourers.
In 1885 due to a decline in farming Mary Moores was selling off the following farming stock.
7 useful dairy cows & heifers
two - one year old bull, stirks.
two active draught horses
two colts
carts, implements & effects.

George Stubbs from Prestbury, Macclesfield came to live and farm at Lightbourne Green after 1881. He was at Lightbourne Green farm from at least 1888 when his wife Elizabeth Julia died whilst living at the farm.
There was a large hay stack fire on the farm in 1895 and Salford Fire Brigade attended it, they used water from the nearby reservoir. After tackling the fire for about two hours, they managed to separate the burning part and save the rest of the hay. The fire caused about £100 worth of damage. The fire was believed to have started from a spark from someone smoking a pipe.
In 1909 the farm was still being used as a dairy farm as George Stubbs was advertising for a milker in the local newspapers.
​Lightbourne Green farm along with the other nearby dwellings were demolished before 1921 when houses were built on the land.
Swinton Park

The East Lancashire Road
Building of the East Lancashire Road which cut across Swinton Park to provide better access between the the Industrial areas of East Lancashire and Manchester with the Port of Liverpool. The road was officially opened in 1934 by King George V.
It altered the area a great deal, resulting in some of the mansion houses being demolished such as, Swinton House, Parkfield House, Springwood House, Endsley House.
Ingleside is still standing to this day and is now the Ingleside Birth & Community Centre. ​​
​Mansion houses and farms of Swinton Park
Images and photographs used in this local history project mainly from S.L.H.L.
Research and written content ©Wallwork History.
www.thewallworks.co.uk