Research and written content ©Wallwork History.
My Great Grandfather's brother Richard Wallwork was a night watchman at Swinton Industrial School for over 10 years, along with his father (my Great Great Grandfather) Robert Wallwork.


The Foundation stone to the school was laid in 1843 by William Garnett of Larkhill (the high sheriff of the County) The school closed in 1925 and was demolished in 1933.

According to Peter Holland a local Jeweller from Swinton for over 60 years, there was great speculation amongst the locals as to what the building was to become, some thought it was going to be a gaol, therefore, the Industrial School was nicknamed the Bastille.

The school was purpose built as a separate institution from a workhouse as a home and school for pauper children. It was set up by the Manchester poor law union of guardians. The school was designed to take up to 1,500 children, but there was never more than 1,000 children there.

The school was built at a cost of £60,000 and designed by Richard Tattersall.

Boys were also taught mechanics and linear drawing and a musical instrument, and girls were taught knitting and needlework.

The children were taught to swim and taken to Swinton baths. As well as having a great reputation for playing sports, the children were also well known for their school band, which gave concerts in the local parks in Swinton, Salford and Manchester.

The school had it’s own surrounding farm land with animals, and gardens where they grew their own vegetables. There was also a cottage hospital. Many of the children were of poor health and died.

Charles Dickens visited the school and wrote in July of 1850

The stranger gazing upon the splendid brick edifice, with its surrounding territory, is surprised when he is told that it is not the seat of an ancient dukedom; but that it is a modern palace for pauper children. 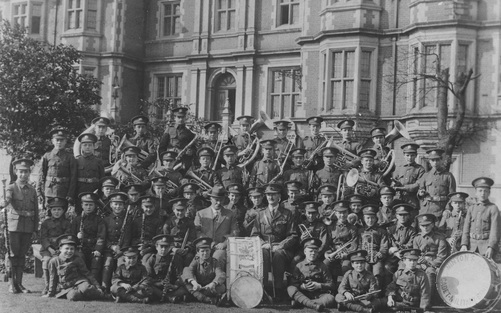 Swinton Industrial School Band
Some of the children were orphans who were sent to Canada for adoption.

I recently met up with a family from Canada after finding their great great grandfather was lodging in Swinton with my great grandmother, I followed his family tree to find that he was one of these such children to be sent to Canada for adoption. He was from a family of five children.  Following the unfortunate death of their father in the Clifton Pit Disaster in 1885, their mother died not long after leaving all five children orphans.  The youngest three children found themselves in Swinton Industrial School and were sent to Canada to be adopted by farmers in Quebec. The children made the journey by boat, (months apart)  the remaining older two children found work and refuse within their extended family and remained in the U.K. Once in Canada, the children never met up again, as sadly one of them had died as a young man before the other one had a chance to find him.  But, the older sister who remained in the U.K. found the remaining brother in Canada and emigrated to Canada to be near him and his family. The youngest child was never found, and is thought to have died on the boat crossing to Canada.

That is just one short real life story of a family whose lives where touched by Swinton Industrial School. 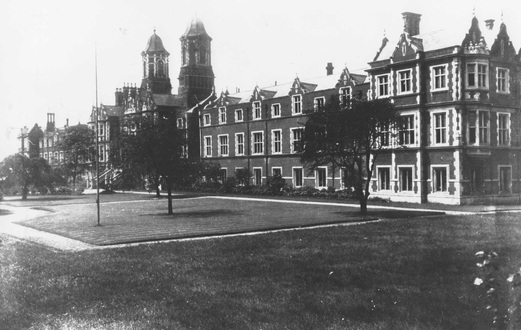 There are a number of books written by people whom found themselves living in Swinton Industrial School.

A.E. (Albert) Guest’s pays tribute to all the staff at the school in his fabulous book about his own life living in the Industrial School. He was sent to the school with his brother in 1897 aged 5 following the death of his father. The school was for pauper children, some of whom were ophans and sent to Canada.

According to A.E. Guest's book there is also a brass plate marking the opening of the school in 1843 which was kept with the Swinton and Pendlbury public library collections, (Pendlebury Library) which I think must have been passed onto SLHL.

A.E. Guest ends his wonderful book published in 1961 by saying "perhaps at some future date some suitable spot may be found to display permanently this relic of an historic school, as a token of the fine work which was carried out by all concerned with the thousands of boys and girls who passed through its gates during the eighty years of its history".

I wonder where it is today? Hope it is in a safe place.
Swinton Industrial School closed in 1925 and was demolished in 1933. 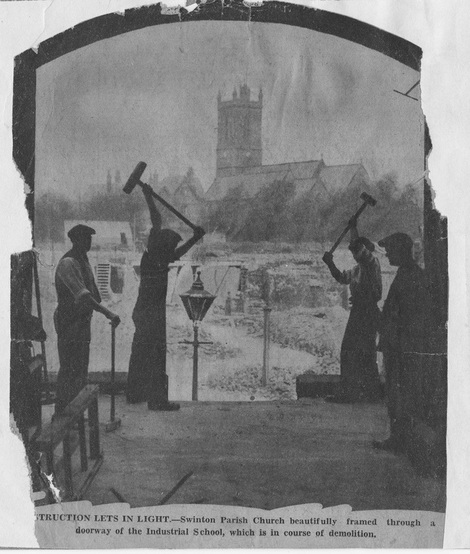 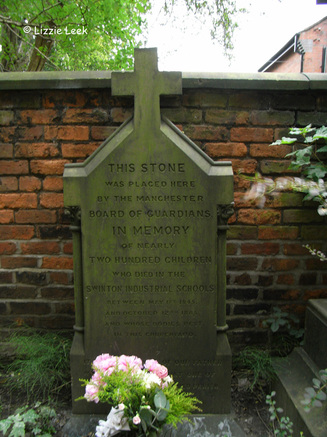 The children are all buried in St. Peters church graveyard, Swinton.
www.thewallworks.co.uk
2005
Contact  Wallwork History
Research and written content ©Wallwork History.​
PLEASE NOTE:- If you wish to share any images/research from my website either contact me or post an acknowledgement link to my website. I am all in favour of preserving and sharing our local history.  It is therefore not my intention to infringe anyone else's copyrights. Images courtesy of SLHL