Miners Riots and Dwellings in Pendlebury

Research and written content ©Wallwork History.
Messrs. Knowles sent two of his mining agents to recruit men from Staffordshire and Cornwall to come and work in his mines as - after the set up of the Lancashire Miners Union which Knowles refused to reconise a meeting was held at Hollingworth Lake, and any collier that was found to be at that meeting was locked-out as a result of this there were more than 1,300 men locked-out from Pendlebury, Pendleton, Farnworth, Kearsley, Little Lever pits.

Over 3,000 men came out on strike to support the men that were locked-out from Pendleton, Agecroft, clifton Hall, Clifton Moss, Stoneclough, Little Lever and Clegg near Rochdale.

The mining in Cornwall and Staffordshire at that time was in a depressed condition, Messrs. Knowles also placed ads in the local newspapers, one of the agents sent to Staffordshire got 20/- per man he recruited to Pendlebury pit. He was well known for recruting blacklegs.

The chaps in the flat caps are brothers, and their families were living in Bilston during 1851, they came to Pendlebury some time between 1860 and 1869, which was the time of the Pendlebury miners lock outs.

The dwellings shown in the photographs below were dated around 1933 before the clearance in the 1930s. 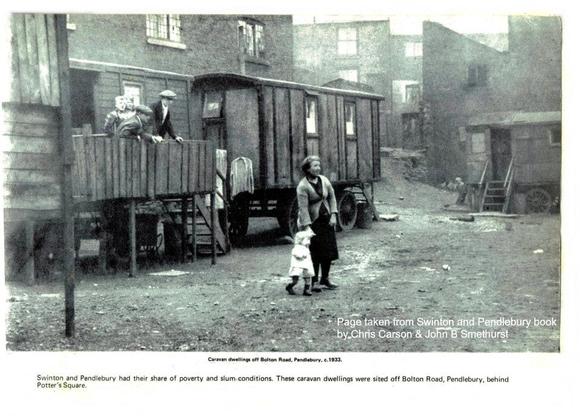 A place called Ginnel, Pendlebury, was behind Potter's Square off Bolton Road, opposite the Windmill Pub.

Ginnel on the census was off Manchester Road (previously Bolton Road) Pendlebury, in the parish of Christ Church, Newtown it was near to Potters Square, (previously named Potter's Fold) and Bold Street. Ginnel was gone from the census or renamed by 1891. 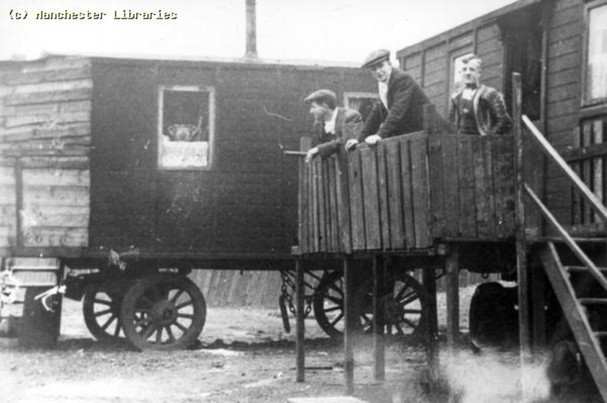 Image copyright of Manchester Libraries
This image is of the same three men as in the photo above, but taken from a different angle. The two men in flat caps were brothers, working as coal miners. 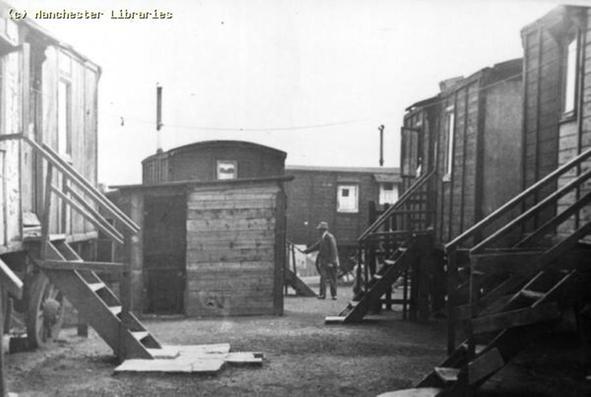 Families were also known to live in the pit whilst waiting for a cottage, along with lodging with loyal employee's of Messrs. Knowles.

The workers that came from Staffordshire and Cornwall were known locally as "knobsticks" (a term reserved strictly for strike breakers) There were lots of fights and riots between the Staffordshire miners and the local miners at one point the Dragoon Guards were called in to intervene.

A representative from the Union later went down to Staffordshire and made the miners there aware that there was a dispute on up north, as It was thought they might not have been aware from the ad's in the local newspapers.

There was some terrible assaults, riots and violence during this time.
​Pendlebury pit was set on fire in the hope of burning it down so it would end all the riots. It sounds like it wasn't a nice time for all involved, as once here from Staffordshire the miners had no choice but to stay put - as they would not have had the money to go back to Staffordshire.

The Union was set up to get better working conditions, as the miners had to pay for their own candles, and to stop children and women going down the pit. There was an act passed that children under 12 were not allowed down the pit, but it wasn't always stuck to. 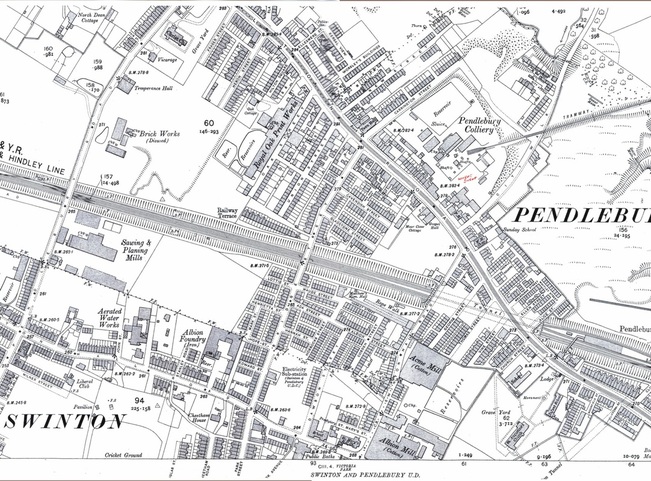 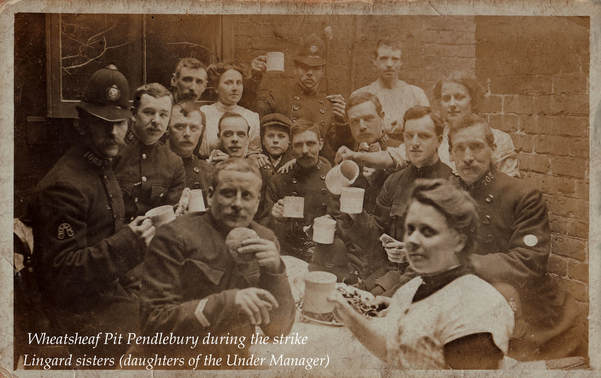 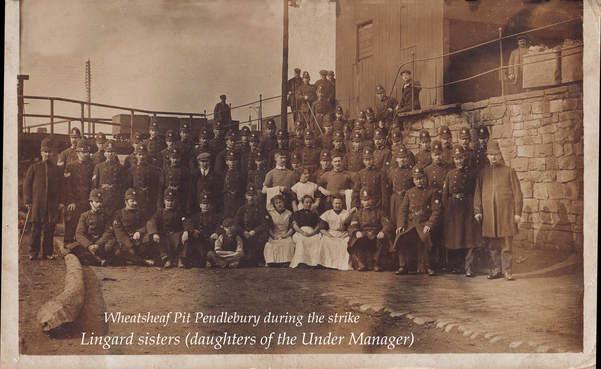 The Lingard sisters were the daughters of the Under Manager at The Wheatsheaf.
1893 map of Pendlebury
showing Potters Square and Newtown Colliery
​which was owned by Clifton & Kersley Coal Co, then in 1925 by Bridgewater Collieries and finally Manchester Collieries Ltd in 1929 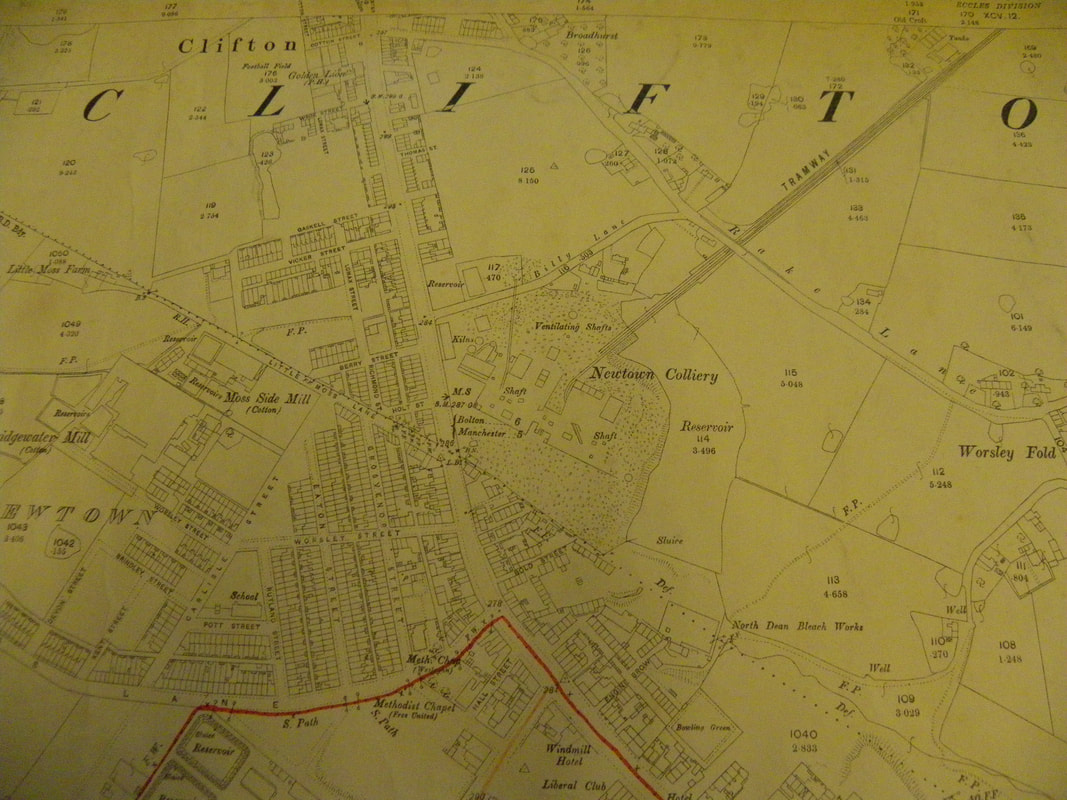 Engine Brow is a place people ask about, it can be seen on this map dated 1893 It was a steep narrow brow almost facing the Windmill Pub. There was a privately owned beer house on Engine Brow at number 43 called the Rose & Crown. Opened around 1853 and closed in 1910.

Ginnel is another place people ask about it is not marked on the map, but going off the censes it seems to have been further along - between Engine Brow the Britannia Pub.